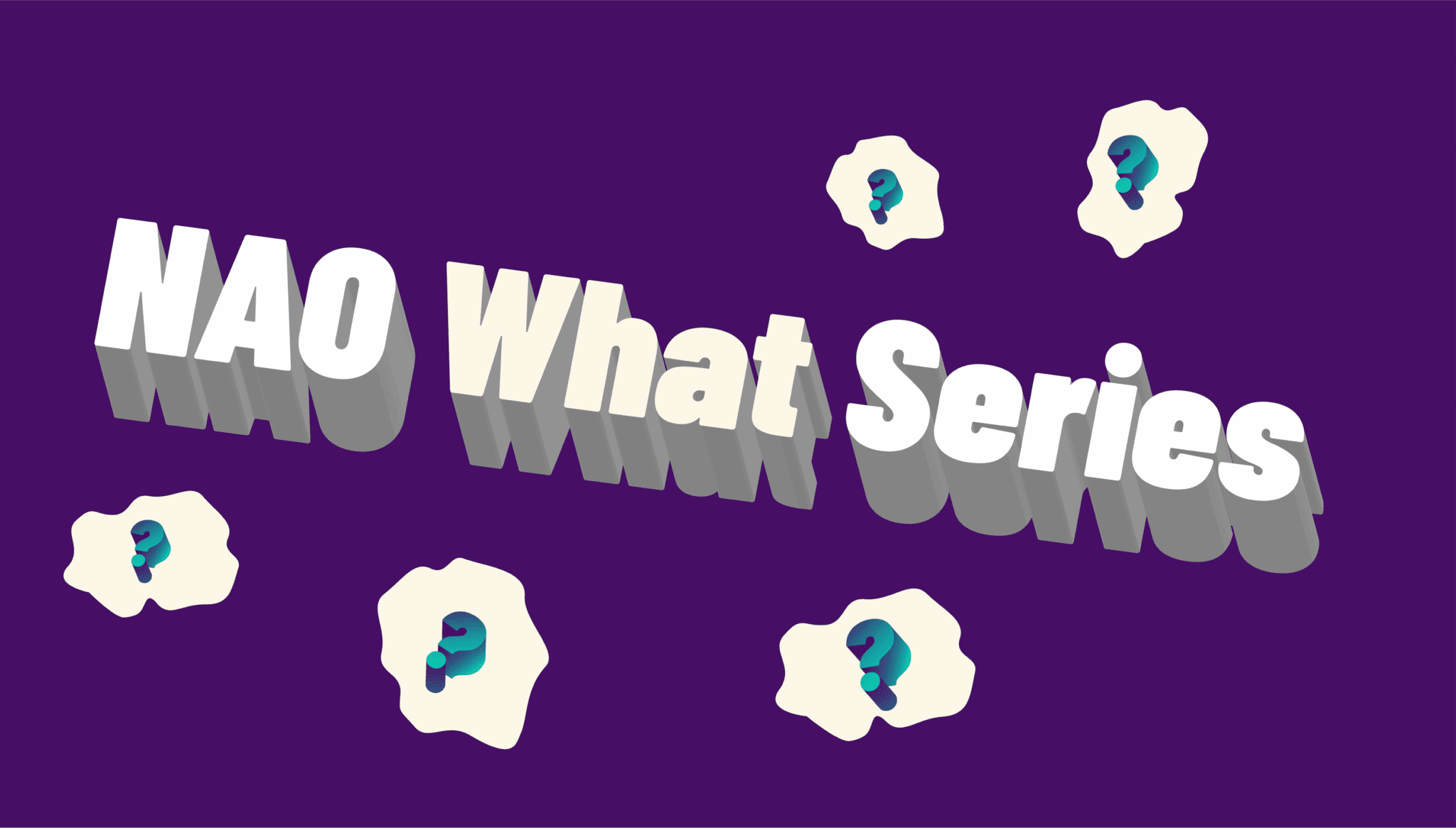 April 20 2020: As we begin to anticipate and prepare for a new After Corona tourism reality (AC), many destinations and the tourism industry are zooming in on the expected rise in domestic and nearby travel. Eager to identify our opportunity to regain what has been lost, are we overlooking our Before Corona experience (BC) and almost Monty Pythonesque logic: That tourism is primarily driven by travellers, and that travellers are all kinds of people! Much like locals. And people – whether travellers or locals – are driven by more than geography and ease in their behavior, in their fears and in their desires. Those drivers also need to be part of our preparation for the world AC.

From James Carville’s famous phrase “It’s the economy, stupid”, we instead feel tempted to point to the people. Because, while tourism serves a highly economic purpose, the question of our shift from a BC to AC tourism reality need to start with people. And that is the focus of this new article in the #NAOWhat series, where we will attempt to seek out the alternative realities of the tourism that may await, putting people center stage.

There are structural questions and limitations too, of course: Lockdowns and closed borders are keeping people from travelling, but in our anticipation of an AC world, we are moving beyond lockdowns and at least towards increased domestic mobility. And we are all eager to imagine what that reality looks like to regain a bit of agency and optimism.

From our work in Group NAO, strategizing and innovating with destinations, cities, companies and the broader visitor ecosystem, we see a strong shared focus on the expected rise of domestic – and then regional – tourism. Yet, the challenge in anticipating and planning for the world AC is more than a question of geography and geographic limitation! That is perhaps why there is something almost comforting in the (surprising?) findings of Olivier Ponti and ForwardKeys, based on flight searches by Italians in the month of March. The data shows that Italians in lockdown are searching for long-haul travel, and while this is based on search, not actual bookings, the results nonetheless express something beyond geographic limitations – something very human: escapist dreaming and optimistic anticipation. 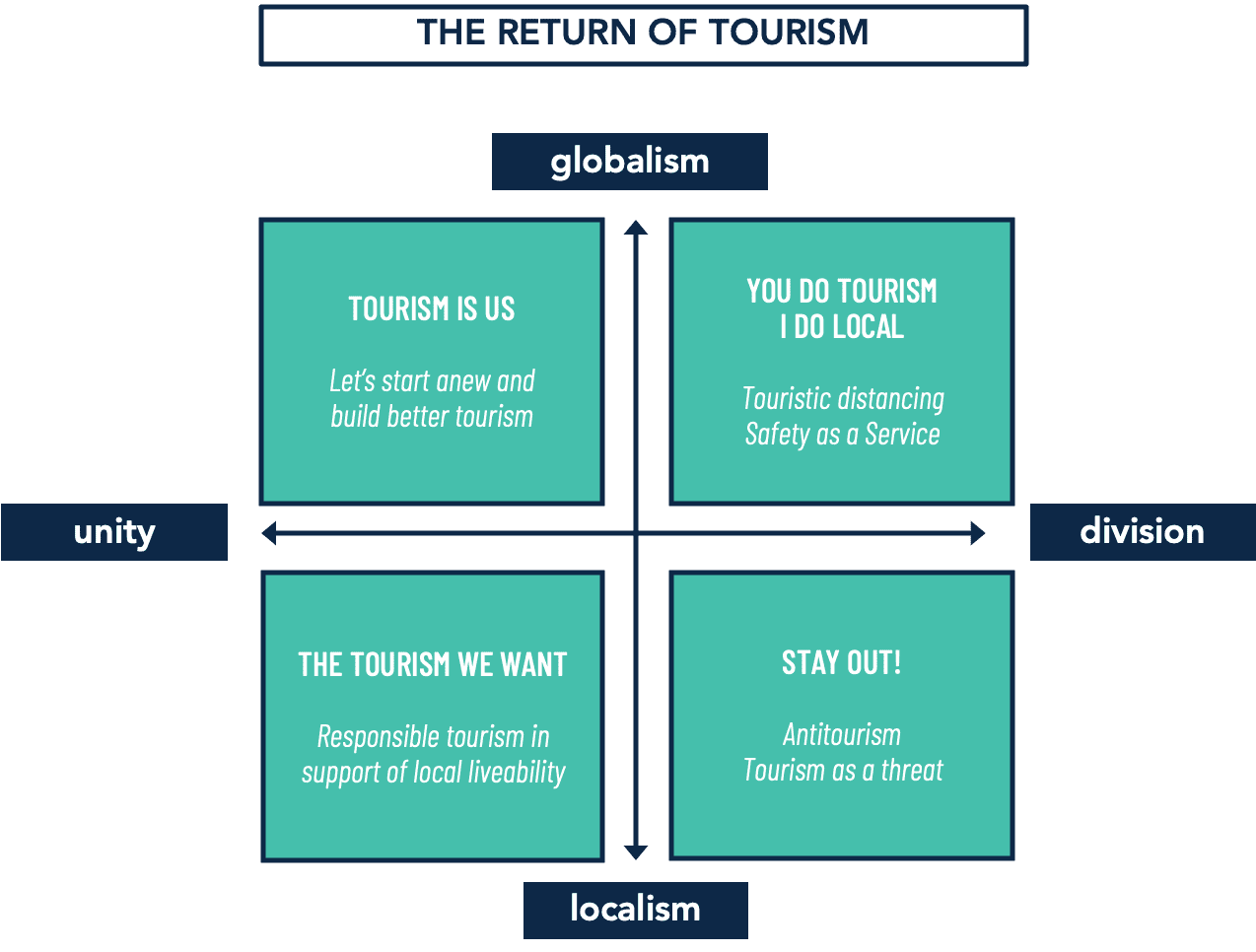 SHE WHO COUGHS… STAY OUT!

Many summers in the world BC, we have seen reports in global media on overtourism and local residents turning against the invasive tourist hoards. Pictures of graffiti messages like “Tourism Kills the City” or “Tourist – You are the Terrorist” have been widely shared. Destinations have also long surveyed resident sentiment towards tourism to evaluate support and introduce mitigation measures, shifting from destination marketing to management. But what will be resident sentiment towards tourism in the world AC?

‘Fools speak truth to power’ – and in this recent episode of The Daily Show, antitourism ads were aired for Hawaii, Alaska and Florida that pointed directly to (also domestic) tourists as dangerous virus-spreaders: “Hawaii is heaven on earth, or at least it was until you dirty mainlanders came and infected us”. The global blame game is in full play – we’ve already seen racial attacks on those perceived as potential carriers of the virus, and now, as the virus spreads across the globe, the blame game has found another target: tourists! We have seen the pictures and read the reports of cruise ships, evoking strong associations with the history of plague ships, unwelcome and most unwanted in ports around the world. Planes have been turned around mid-air and though very much tongue in cheek, destinations have been requesting visitors to “stay the f*** home”.

As societies and local communities get the virus under control, how and when will they welcome back outsiders – tourists – into those habitats that have only just reopened after long and painful lockdowns?  As Avi Meir puts it: “the looks you will get if you cough or sneeze at an airport or on a plane will be scathing. I predict social stigma will put a lot of people off, resulting in the potential for more no-shows on travel days (once prices are stable)”. Indeed, now, coughing can be considered an act of terrorism – and so indeed, the coughing tourist could start living up to its ‘graffitied’ BC reputation as the terrorist. Now, not only threatening the liveability of a community, but the safety of the community insiders.

SAFETY AS A SERVICE

As we come out into the anticipated world AC, we will still need to socially distance ourselves, seek the less crowded and minimize physical contact with others. As the world starts to travel again, even if less freely and shorter distances, “touristic distancing” could well be a reflection of both the demand of travellers as well as locals.

In a survey by PhocusWright of traveller sentiment in the age of COVID-19, travellers indicate both travel intent and concern in the world AC. The highest fear factors related to travel include getting ill at the destination (US and UK travellers), quarantine in destination or upon return (German travellers) and becoming ill in transit (French travellers).

Travellers will demand more reassurance, with health and safety an even bigger consideration in travel decisions. Services and offerings that guarantee a certain standard or level of cleanliness and hygiene will probably gain competitive advantage, like the SG Clean programme launched in Singapore or the label of sanitary-standards compliance of Hospitality group Accor and Bureau Veritas, or crowd controls in museums with time slot ticketing, or fever controls and antibodies control tests in airports.

The priority of certified safety and cleanliness could mean a shift away from the inclusivity of localhood and multi-use offerings, where the differentiation and distance between locals and visitors is almost inconspicuous. A shift instead towards an era of exclusivity and separation between the touristic and untouristic, offering products and services that cater to one group exclusively – whether local or tourist. As described by Mauricio Prieto, we could come to see a shift away from the earlier BC trend of hotel common spaces opening up for social gatherings and multi-use by guests and non-guests alike towards more closed-off properties, where low population density and cleanliness will be part of building trust and competitive advantage.

At the same time, the BC rise of home-sharing and localhood experiences may be challenged in the world AC. On a very human level: How will Airbnb-hosts welcome (potentially contagious?) travellers into their private homes? And will the guests feel safe in the socially shared space? Many Airbnb hosts have already had to shift towards more long-term rental to maintain their income, and the question remains if they will return once travel resumes? Will the welcoming role as host be as appealing in the world AC? For the Danish speakers, I guess the irony of “host” actually meaning “cough” in Danish is clear.

In response to crisis, we have seen a surge in #supportlocal initiatives. This may continue into the world AC, where local communities will view tourism as a potent(ial) business booster to local businesses and offerings. In this case, focus on “the tourism we want” and not simply “the tourism we get” will be key, as main priority will be local community – and tourism will be evaluated accordingly, meaning tourism will only be as good as its contribution to sustain and support our localhoods.

The corona pandemic has shown us that the unimaginable is indeed possible. The unimaginable “stop” of everything, closing down societies and economies in lockdown and distancing mode. Perhaps even more unimaginable has been the togetherness and creativity that has ensued. #Togetherapart and open, non-competitive sharing of new ideas and innovative solutions has become the norm.

In some places, this has also resulted in a renewed focus on a changed tomorrow. In France, #LeJourdAprès opens a discussion not on the tomorrow that will come, but the tomorrow we want. And in a tourism context, the tourism minister of New Zealand has announced an effort to reimagine the way tourism is governed, to “rethink the entire way we approach tourism to ensure that it will make New Zealand a more sustainable place, enrich the lives of all our people and deliver a sector which is financially self-sustaining in the longer term.”

Climate activists have been trying to incite our sense of emergency for years. Now, having lived through the pandemic emergency, will we come out into a world AC with a stronger sense of global togetherness? As inspired by this interview with the Danish historian Michael Böss, will the world AC be characterized by a more planetaristic mindset than cosmopolitan? Where travel will be a privilege and tourism reinvented to match our shared responsibilities to Earth with more digital meetings and events, virtual experiencing and shared solutions to global problems.

Even if planetarism is not the end-scenario of our world AC, the unprecedented level of open collaboration and support throughout the crisis may bode well for the anticipated tomorrow of tourism, reinvented, reshaped – and human. Because remember, it’s the people, stupid! Or, as Tim Fairhurst of ETOA puts it more elegantly; “Tourism isn’t them, it’s us, in different places.” 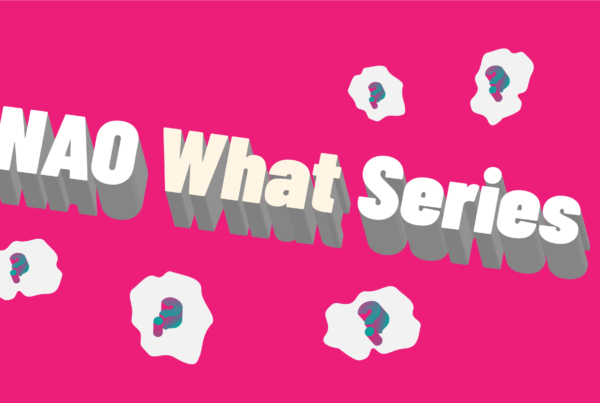 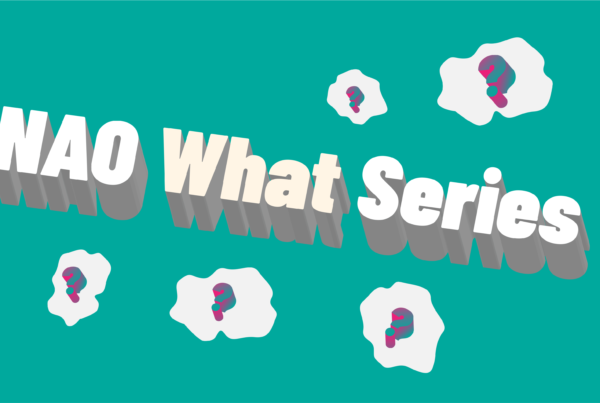 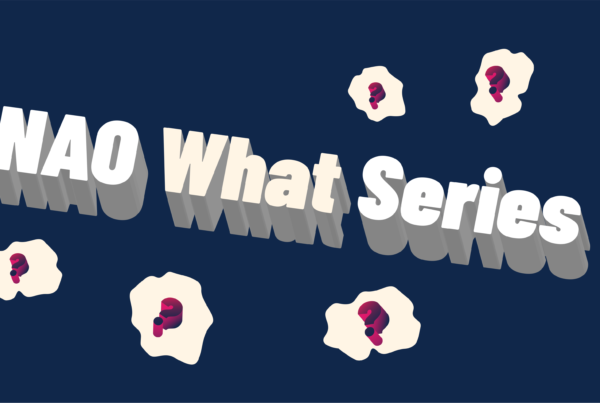 THE END OF TOURISM?